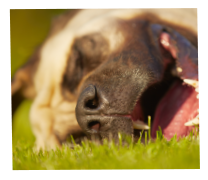 Is it Normal for a Dog to Snore?

Snoring, common in dogs, is rarely caused by anything serious. Still, if your faithful friend keeps you awake sawing logs most nights, figure out the reason. If it's preventable, take steps to correct it and get yourself some Z's. Have a question? Get an answer from a Vet now!

Brachycephalic Syndrome - If you own any of the flat-faced, short-muzzled breeds of dog, such as bulldogs, Boston terriers, boxers, pugs and Pekingese, yours are likely to be snorers. Brachycephalic syndrome is common among these breeds. The flattened structure of their skulls causes narrow nostrils and windpipe along with an elongated soft palate. As these dogs breathe, their windpipes flattens, causing the characteristic snoring, snorting and generally noisy breathing typical of brachycephalic breeds. If Fido's snoring is extreme, talk to your vet. Occasionally, minor surgery is recommended to open up the dog's airway and relieve the obstruction that causes snoring.

Allergies - Dogs can have allergies to pollen, cigarette smoke, grass and other airborne allergens, just like people. Common symptoms of airborne allergies are itchiness, runny eyes or nose, coughing, sneezing or wheezing. Fido's congested nose acts as an obstruction during sleep, leading to loud breathing or snoring. Your vet can diagnose allergies and might prescribe a canine-safe antihistamine to treat the discomfort. Other steps to take include washing Fido's bedding regularly, walking him outdoors in the morning or evening when pollen counts are low, vacuuming your home frequently and keeping him away from cigarette smoke.

Nasal Obstructions - Nasal obstruction can cause snoring. A dog investigates his environment by sniffing and smelling, which can lead to foreign objects in his nose. If Fido is a digger, he might have snorted dirt up into his nostrils, causing irritation and swelling which could lead to snoring. Foxtail weeds, grass and other plant materials can get up a dog's nose. A flat-faced breed is prone to aspirate water or food. Any of these can lead to obstruction, irritation and excessive mucus, causing a dog to snore. Though nasal obstruction often clears up on its own, you should visit the vet. If snoring continues, or if you see symptoms such as pawing at the nose and head, shaking the head, runny nose or obvious signs of irritation, get to the vet. Nasal tumors or polyps are another cause of obstruction. Your vet can remove growths surgically.

Tips to Relieve Snoring - If your vet has given Fido a clean bill of health but he's still a snorer, consider a few hedges that may help minimize nighttime cacophony. A round dog bed encourages curling in a ball, which expands the airways. Meanwhile, an elevated head helps relieve congestion, so try giving your dog a small pillow. Run a humidifier near Fido's sleeping area to moisturize the air, and keep him away from smoke. If your dog takes medication, ask your vet if snoring might be a side effect.

References:  Petside: Dog Snoring: How to Stop It     VCA Animal Hospitals: Allergy - General in Dogs. VetInfo: 6 Ways to Stop Dog Snoring. Pets Adviser: Why Does My Dog Snore When He Sleeps?